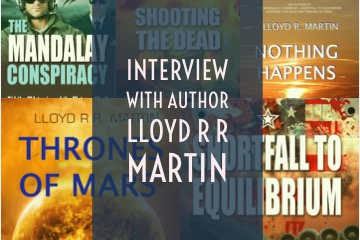 How far would you go to write a novel? For Lloyd R R Martin, even learning rocket science wasn’t too much of an ask. Whether you’re a reader, an established writer or an aspiring author, I think you’ll find this interview offers a fascinating insight into another writer’s process.

What motivated you to become a writer?

Most, if not all, writers do so because they have to – not from any desire to become rich and famous. The creative juices within them dictate that they have no choice.

I feel lost if I don’t have a project to work on as I drop off to sleep.

What is the greatest joy of writing for you?

You know when you get into a good book, and become absorbed by it?

Writing is many, many times better than that!

One of our writing group once said that writing dialogue is the easiest task.

I disagree. I find that writing and describing a fight or action sequence is easiest for me.

How do you chose the subjects to write about?

It is very much on a case by case issue; for example;-

My first book; The Mandalay Conspiracy, began to be about aeroplanes. When I finished it I picked up three books at random. I took one look at them, and it was obvious that my book was about aircraft – theirs were about people. So I re-wrote the book to feature a main character – Coniston Fowler.

Then we come to the Steve Steele books, beginning with the Shortfall trilogy. I worked out that ‘James Bond’ style stories were popular, so read a few ‘Bond’ books. I found to my dismay that they were obviously written in the style and language of the 1930’s. So I took inspiration from the films. The first problem is devising a new and all-encompassing threat to world peace that seems impossible for one man to defeat.

The main title of that first book, ‘Shortfall to Equilibrium’ comes from a line in the book, ‘… when the elements are not conducive, the shortfall to equilibrium is made up with skill, confidence and experience’. The passage relates to landing a seaplane on a rough sea in bad weather.

The third Steve Steele story, ‘Nothing Happens’ takes complicated story-lines to a new level, because it involves quantum dynamics. The bad guys this time have found the remains of a meteorite, the elements within which can kill electrical equipment. When they start experimenting by shooting down jumbo jets, something has to be done. This title is derived from a working title that was too long; – ‘Nothing Happens, then Nothing Happens: QED.’ When this weapon is triggered off a column of energy one atom wide is released. To the observer nothing happens. All electrical equipment within a large sphere is fused to itself – nothing happens. QED relates to Quantum Electromagnetic Dynamics.

Some three years ago I got wind that NASA were going to launch a mission to Mars. By counting on all of my fingers I worked out that I could write three books of a respectable length by the time of first launch. I made it, but NASA didn’t!

I didn’t realise that I had to learn rocket science in the mean-time!

Then I had to bring them back.

What do you find most satisfying about writing?

Writing myself into a corner with no way out; then finding a way out.

For example, the heroine in ‘Shooting the Dead’ gets caught by the bad guys, and is locked up in the brig of a nuclear sub. I had to build a big model of a nuclear sub – including the interior – to work out how she would escape.

The world of publishing has changed beyond recognition with the digital age, and particularly the growth of e-books. In what way would you say that things have improved?

Once the book is finished we writers used to be forced into a world where a hand-full of people (publishers) decided who got into print and who didn’t. In that world, if you can’t get on national tv you were up against it.

Now, with indie publishing, or print-on-demand, we the writers, decide who gets published.

What is your writing process?

I aim at writing 1,000 words a day. This usually takes just over two hours.

This does not include plot invention. My plots are allowed to develop themselves; I don’t know how this thing is going to end. The story has to be edited, re-written, dragged apart, characters have to be checked that they didn’t get killed off on page 65. Edit again, and then put through editing software to check for things like adverbs, etc.

Even then mistakes get through, so readers are involved to spot things that have escaped.

How do you approach cover design?

I spend many, many hours on this process. I build and photograph models, sketch out scenarios, photoshop many images – and then ignore the whole lot, and turn the job over to a graphic artist.

My study is very crowded and full of all sorts of distractions. The most difficult thing to deal with in any creative endeavour is work avoidance. This comes in many guises – it’s main disguise is research. Your subject is interesting to you, and you must continually research this to further your knowledge.

Take the orbit of Mars. I needed to know about this for the Mars Quadrilogy. A clever chap called Kepler did a lot of work on this, so I downloaded some stuff. It covered seven pages of mathematics and geometry! This is far too much complication for the reader. One has to know where to draw the line, and get back to some productive work.

What’s the story behind your latest book?

The latest book is available as either a complete book, or a four-part quadrilogy. It concerns itself with man’s first landing on Mars.

The main character, Colonel Preston Ashton, takes us through the preparation for such a mission. Unfortunately people die during this time. Secretary Michelle Romero investigates.

When the astronauts reach the ship being built in orbit they find that robots are doing most of the work.

It must be pointed out here that I have only used what we now have, or are developing; there are no alien monsters, or superheroes – reality is paramount.

Do you remember the first story you ever read, and the impact it had on you?

Ironically, at about age eight, my very first book was call ‘Stand by for Mars’. It must have been pretty awful, at that time we still thought that there were canals, vegetation and an atmosphere on Mars. I would like to see it again!

What are you working on next?

If I can find another threat to mankind, it may be another Steve Steele novel.

But at the moment I am thinking that people who read ‘Thrones of Mars’ are asking, – ‘What happens next?’

Lloyd Martin is author of ‘The TSR 2 Conspiracy’ , ‘Shortfall to Equilibrium’, ‘Shooting the Dead’, ‘Nothing Happens’ and ‘Thrones of Mars’. For information about these books or purchase details, visit www.writerlloyd.com.