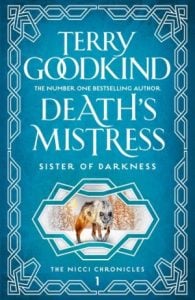 Another disappointing instalment from one of my writing heros

Let me start by saying I love Terry Goodkind’s writing – well some of it anyway. I love his Sword of Truth series to bits and have read many of the books more than 10 times each. In fact, those books have been a key inspiration for my first fantasy novel (in progress). I believe I have read every book he’s written, including Nest (a thriller) and The Law of Nines (set in ‘our world’), indeed I own all but Death’s Mistress which I borrowed from the library, but unfortunately I’ve been really disappointed with his last few novels and Death’s Mistress is sadly no different. I’m even glad I didn’t take the leap and buy it (though I do actually feel guilty for not supporting one of my favourite authors in that way).

I love the idea of a book centred on Nicci and Nathan, the latter being one of my favourite characters. I do also have to admit that at the end of the book I did want to know what happens next. Unfortunately, this is largely because not a huge amount happens in this first book of Goodkind’s new series. But being so fond of the characters in these books, I also want to know what happens to them. In particular, Nathan has lost his powers and I can’t help but worry for him and hope that he gets them back soon (I’m sure he’ll get them back eventually – it seems a mandatory consequence of the narrative imperative).

One of the two things that bother me most about this book is that Goodkind has continued his recent writing style (which he adopted when commencing his Richard and Kahlan series) and I found this quite objectionable. It is far less sophisticated than the style he uses in his Sword of Truth series. So much so that it seems almost condescending. Apparently this isn’t a universally held view however, as his recent books still get plenty of four and five star reviews. As such I think we can expect this style to continue at least for the rest of this series.

The second thing that really bothered me about this book was the way Nathan and Nicci refer to each other – ‘wizard’ and ‘sorceress’. While Nathan and Nicci were never best of friends, or even very close, in previous novels, they did at least refer to each other by name the few times they had occassion to mention each other. I’m sure Goodkind has made this change to help convey the fact that they travel together in the book for reasons of convenience rather than for each other’s company. But it doesn’t flow on from the previous books and I found it so jarring that it severely eroded my ability to willingly suspend disbelief. And to be honest, I think this is one of the worst sins a writer can commit. For those who have never read a Goodkind book, this may not seem so terrible as they don’t have a frame of reference with which to compare it to. But if you are one of those people who haven’t ever picked up a Goodkind book, please do yourself a favour and start with either Wizard’s First Rule, which is the first Sword of Truth book, or Faith of the Fallen, which is the sixth book in the same series.

I briefly considered giving this book only two stars but decided it wasn’t that terrible. It’s hard to tell whether this is a true reflection of my feelings about the book or a result of my bias towards Goodkind because of how much I love some of his other books, but either way, I wouldn’t recommend reading this until you’ve read his other works. Even then, I’d recommend waiting till all the books in the series are out so you at least don’t have to wait to find out the main plot points.

An Engaging Read with Sophisticated Language for Ages 9 and Up

A contest, unknown lands and a reluctant traveller make A. L. Tait’s ‘The Mapmaker Chronicles: Race to the End of the World’ an engaging adventure story for children aged 9 and over.

Patricia Cornwell’s ‘Book of the Dead’ has an interesting premise and plenty of intrigue but for me, the execution let it down.