Instagram hashtags enable you to reach members of your target audience who don’t follow your profile. This increases your reach, improve your brand awareness and can ultimately help you grow your business. But finding the right hashtags is time-consuming (and very much a process of strategic trial and error) unless you use a tool that gathers and analyses the effectiveness of hashtags in the real world.

I recently discovered a tool that does exactly that. And unlike other similar tools, it does so in real time, so you have the most up-to-date information on which to make decisions about hashtags on your social posts. It’s my new favourite social media research tool!

Why do you need to use hashtags on instagram?

You see, normally only people who follow your profile will see your posts in their news feed (as long as they happen to be looking when you publish them, or if they scroll through their news feed). But when you add hashtags, people can also be shown your posts when they search for a hashtag you’ve used.

So adding hashtags enables you to reach people who aren’t following you — potentially people who’ve never even heard of you.

There’s also some evidence to suggest that using at least one hashtag can increase engagement with Instagram posts. And increased engagement can help your posts perform better in the Instagram algorithm, help you connect with your audience and increase the chances that they’ll want to buy from you because they like and feel a connection to your brand.

I used to do this manually because I wasn’t convinced I was getting value for money from paid tools — for instance, I don’t think there’s much value in using a hashtag generator. But I recently came across a tool called HashtagFox that makes it easy to not only find Instagram hashtags that are performing well for others, but also find Instagram hashtags that will be effective for your profile.

All you do is type in your targeted hashtag, which is a relevant hashtag (perhaps a trending hashtag) you think might work (it doesn’t have to be a popular hashtag — you can even choose really niche hashtags) and HashtagFox will give you a set of related hashtags that real profiles are using right now complete with an efficiency rating based on the number of likes and comments posts with those hashtags get, coupled with your current engagement rate. And unlike other similar tools that use historical data, the rating for each related hashtag is calculated in real time, so you always have the latest data. 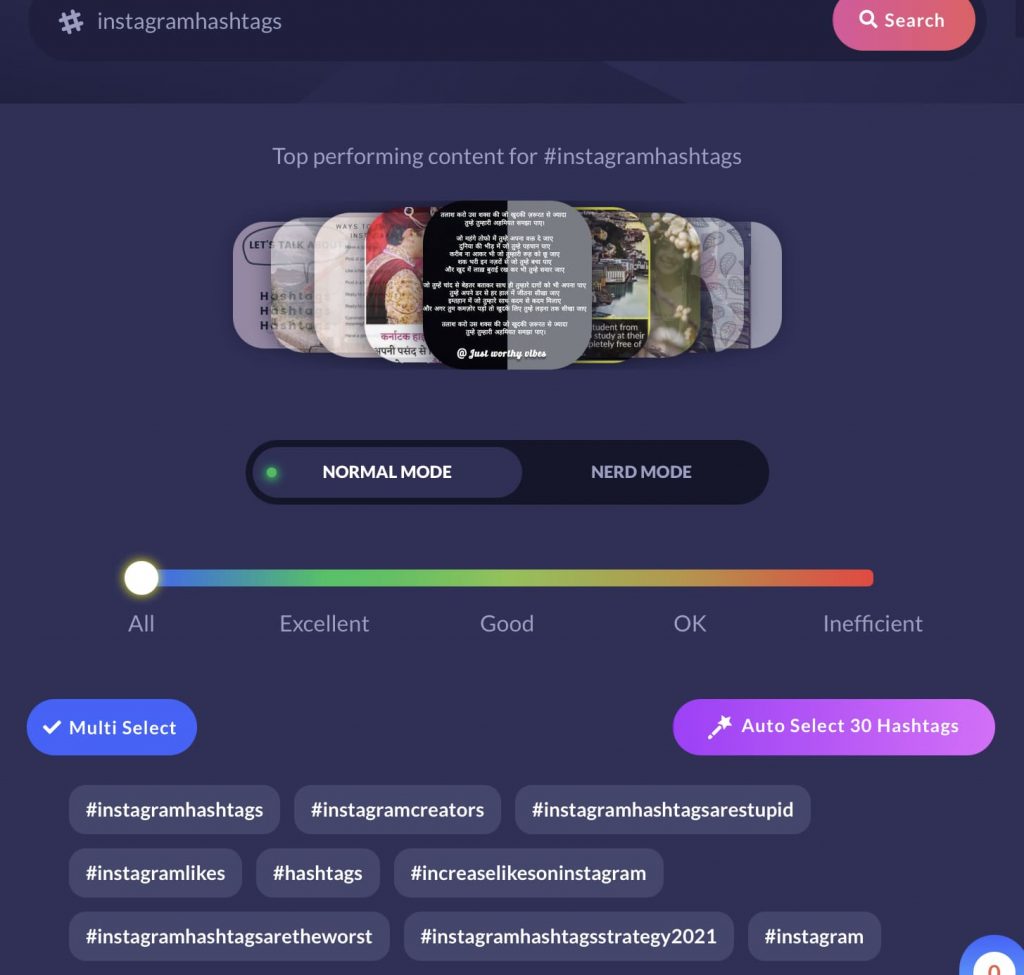 You can also see what kinds of posts are being published with each hashtag, so you can go with the flow or work to create something that will stand out. And you can create collections of similar hashtags that you use regularly to save time when creating posts. 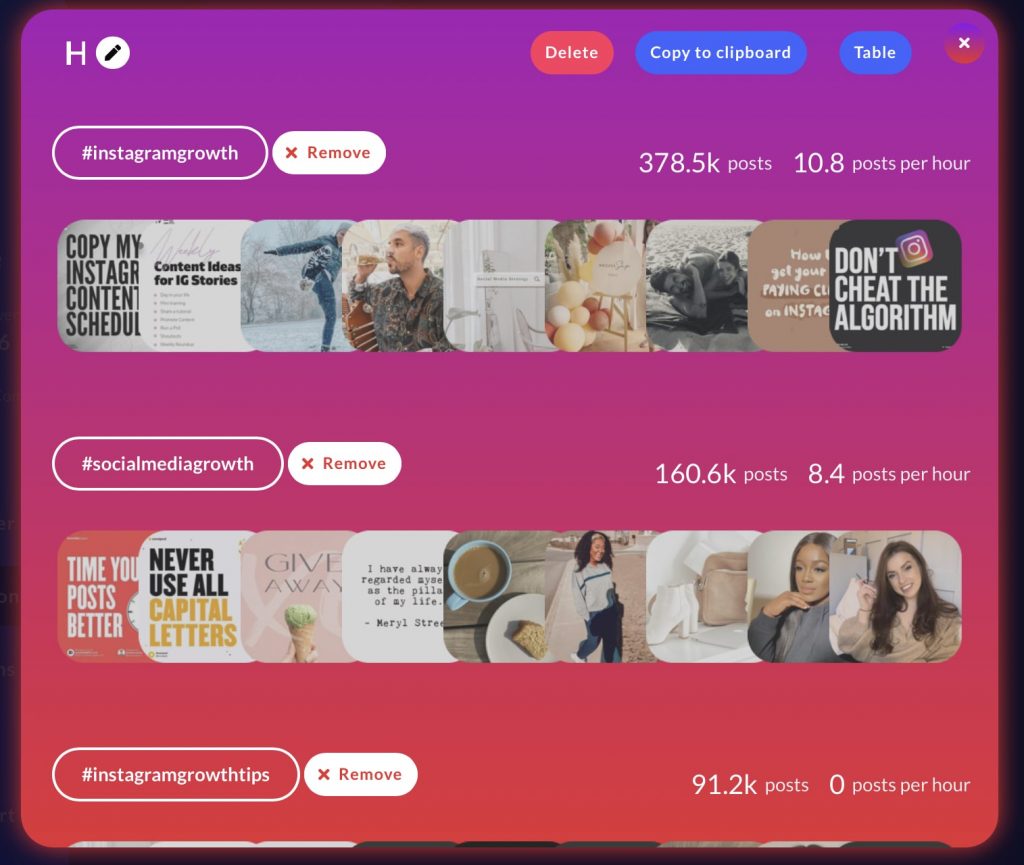 A nice bonus feature is that the tool shows you your engagement rate, average likes and average comments. You can easily get this elsewhere, but it’s nice to be able to see that when you’re doing hashtag research rather than switching between tools.

If you want to try the tool to see if it suits your workflow, the creators offer a free trial. After that, it’s $29/month, which is pretty affordable if Instagram is one of your key marketing channels.

Just because you can use 30 (or 10) Instagram hashtags, doesn’t mean you should. While some people swear by using all the hashtags allowed, ultimately, it’s going to depend on your audience. Note that some audiences find too many hashtags spammy, especially if they’re keen Twitter users.

Some oft-referenced research indicates 11 or more is a good number of Instagram hashtags to use. Many people misinterpret this research, thinking the optimal number of hashtags is 11.

Some research that was very limited in scope indicates the maximum number of hashtags is optimal.

A bigger study indicated that using 30 hashtags won’t give you the highest amount of engagement.

Despite the high amount of interest in this area, I simply couldn’t find any robust research that conclusively shows that a particular number of hashtags is the best. So, as with any other part of your marketing efforts, always tests what works for your audience.

And be aware that you’ll get far more value out of choosing a smaller number of hashtags, as long as each one is a good hashtag — the right hashtag for your needs, as opposed to choosing 30 mediocre or irrelevant hashtags, where each one is a generic hashtag that holds little meaning, a unique hashtag that no one’s entering into Instagram search, or a random hashtag that has no connection with the content of your post.

How do you know if your Instagram hashtags are working?

You can check the effectiveness of your Instagram hashtag strategy for free by creating a spreadsheet that tracks the number of hashtags vs. other key metrics, such as likes, comments, profile visits and website visits.

If that seems like too much manual work, there are paid tools that will enable you to track the impact of your Instagram hashtags.

Does putting hashtags in comments work?

A lot of ‘experts’ recommend putting your hashtags in the comments because it leads to less clutter in your main post and make it seem less spammy. But that means people may not see your image when they click on a hashtag. And that would lead to less engagement etc.

One study indicated that putting Instagram hashtags in the first comment results in fewer likes and comments, and reduced reach, but more profile (Instagram bio) visits. But it wasn’t a very robust study.

One of the studies referenced above indicated that if you have up to 100,000 Instagram followers, you might increase your reach and impressions by putting Instagram hashtags in the main post but may get a couple of extra comments if you put them in the comments instead.

So, once again, test what works best for your audience.

TLDR; How to choose the best Instagram hashtags for your profile

Instead of using trial and error, a tool I recently found called HashtagFox can tell you which Instagram hashtags will give you the most likes and engagements based on your current engagement rates and real-time data about the effectiveness of those hashtags when used by others. It’s a cheap and easy way of finding hashtags that will work for your profile if Instagram is one of your main lead generation or sales tools.