Five things to learn from Floriade 2017

For those of you who don’t know, Floriade is a peak spring flower show in Australia. Unfortunately, because it’s focussed almost exclusively on bulbs, it tends to be pretty much the same every year. But that doesn’t mean there’s nothing to be gleaned from a visit; or a review from someone who has checked it out. So, whether or not you’ve had the opportunity to visit Floriade, here are five things you can learn from the event:

When it comes to spring-flowering bulbs, there is little in the way of height variation so a mass planting of bulbs will produce a flower show pretty much at ground level. Not only is this fairly uninteresting, but flowers at ground level aren’t as easy to appreciate as those that are closer to eye level.

Thus, one thing you can do to add interest to a bulb display is manipulate the planting area to artificially raise some flowers above the others.

You might do this by creating mounds of soil in which to plant your bulbs. This creates subtle raised areas as in this example (it’s a little hard to tell in photos because the effect really is quite subtle but in this one, the yellow flowering bulbs are raised above the others). 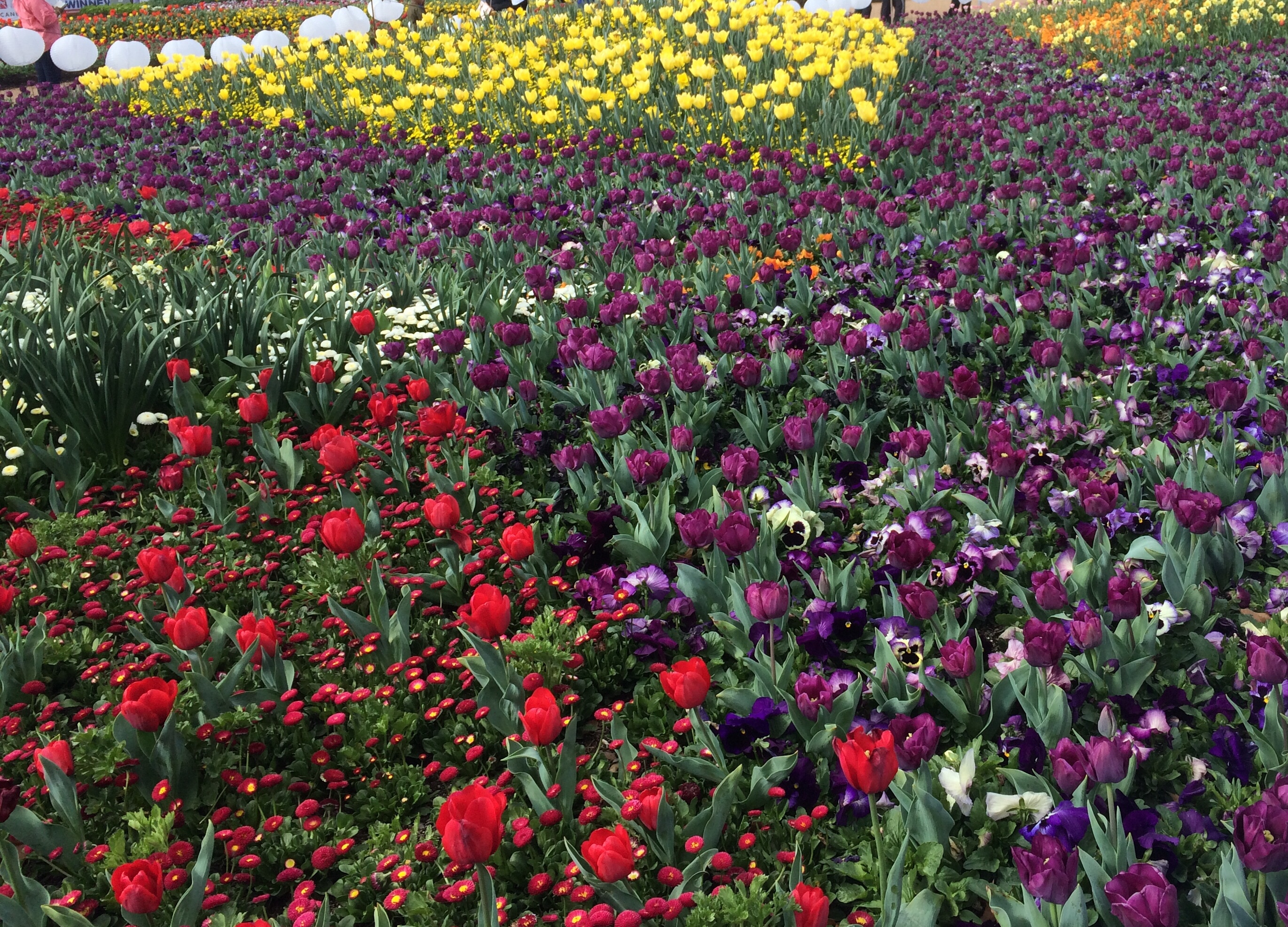 If you want something more obvious, you might build raised beds with some kind of border to demarcate the boundaries as in the example below. This could work particularly well in formal gardens.

If you really want to make a statement, you might create a tower or other structure within which to plant your flowers as in the below example. This kind of planting requires a lot of care and maintenance (due to shifting soil and increased water requirements for instance) but it certainly stands out. Note that in this example, violas are used rather than any kind of spring-flowering bulb. It can be done with bulbs, though perhaps with greater difficulty given that bulbs generally require a greater soil depth. 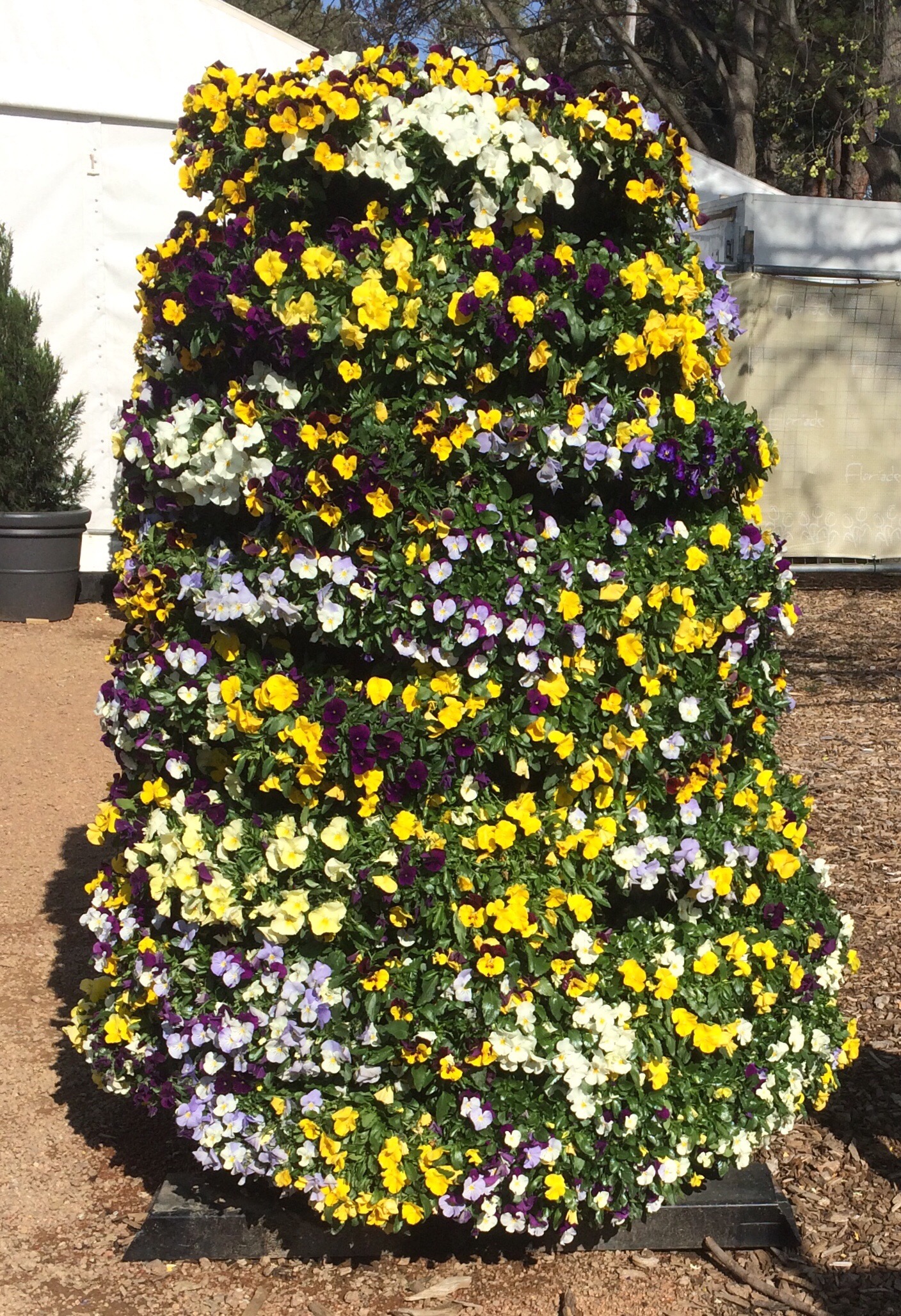 2. Be careful when basing a display on colour

The Floriade designers are not alone in developing bulb displays that rely heavily on colour for their full effect. While many bulb suppliers make this task easier by selling bulbs in single colour packs, be aware that even the most discerning supplier can make mistakes. When you’ve planted a solid mass of a particular colour, one flower of a different colour really stands out so such mistakes can really affect your design. Of course, you can pull any offending bulbs out of the design – provided you can get to them without trampling the surrounding flowers.

This is not to say that you shouldn’t develop planting displays that rely on colour, only that you should think about how to deal with the consequences of a rogue flower. One way might be to ensure your beds are narrow enough that you can reach all the plants within. This is a great strategy because it means you can weed your beds more easily too. Indeed, I always advocate for narrow beds as your plants will be so much healthier if they’re growing in soil that hasn’t been compacted by foot traffic.

There are a huge variety of spring-flowering bulbs and they can make stunning displays but their flowers are short-lived and the plants themselves don’t always cover the soil all that well either. Bare soil means more water wastage and greater plant stress while short-lived flowers usually mean a boring and untidy area after flowering (though of course, some bulbs do have interesting foliage too).

The solution to both of these problems is to inter-plant with other species. Good choices for companion plants include species, such as the violas in the example below, that can cover bare patches of soil (living ground covers), and plants that add some height variation. It’s a good idea to choose species that add interest over a prolonged period of time and which do not die back over winter – unless you want to sow an annual winter cover crop each year. 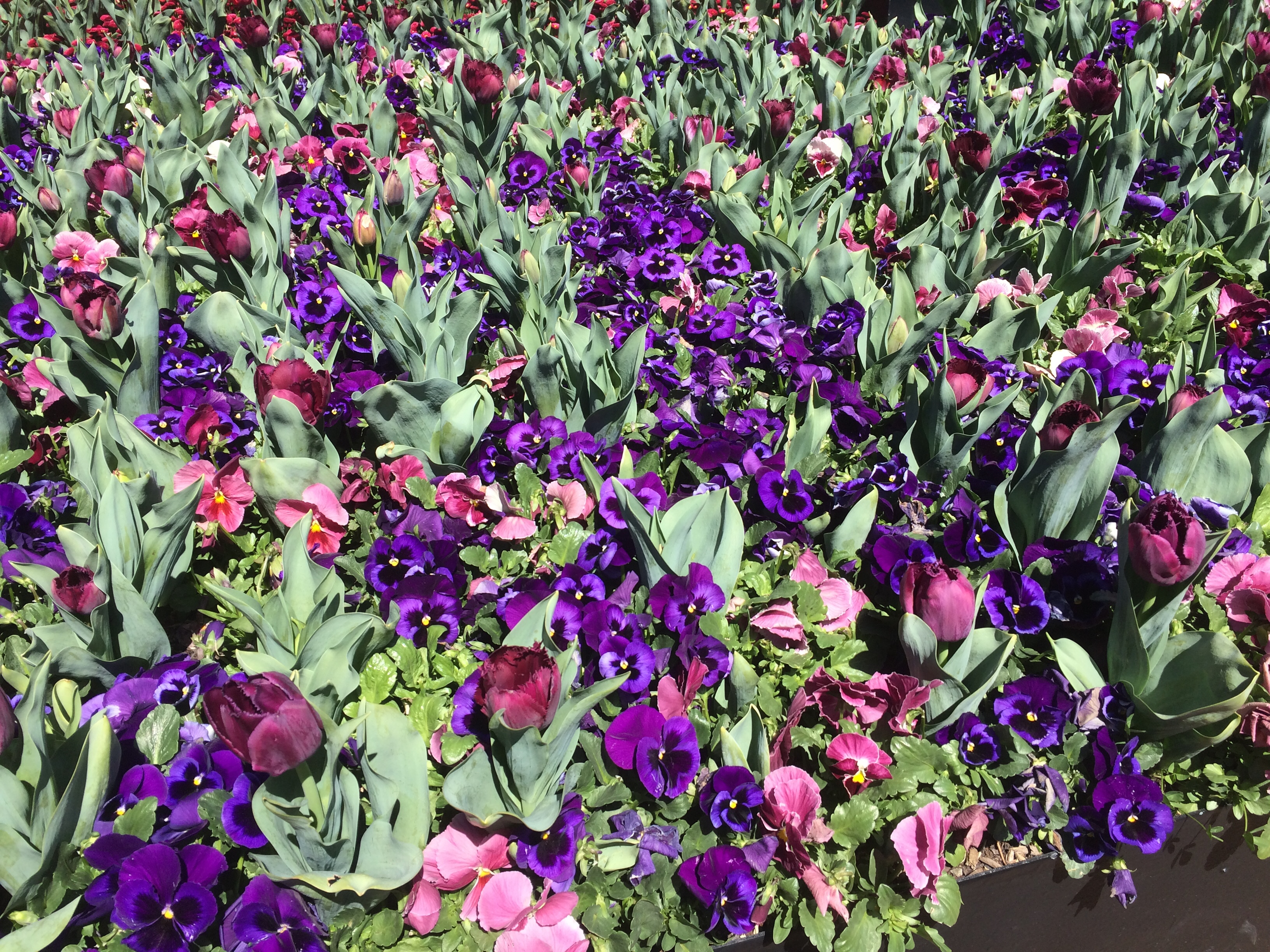 4. Be prepared for the effects of weather fluctuations

Spring-flowering bulbs flower for such a short period of time so fluctuations in weather that shift their flowering times can have a massive impact on any planned displays. As an example, a display that was supposed to consist of successive sprays of flowers might instead produce a stunning display of flowers over a short period of time and then nothing for the rest of the season if all the flowers bloom at once. The photo below shows a bed of flowers that are flowering out of sync because we had an unusually warm end to winter. 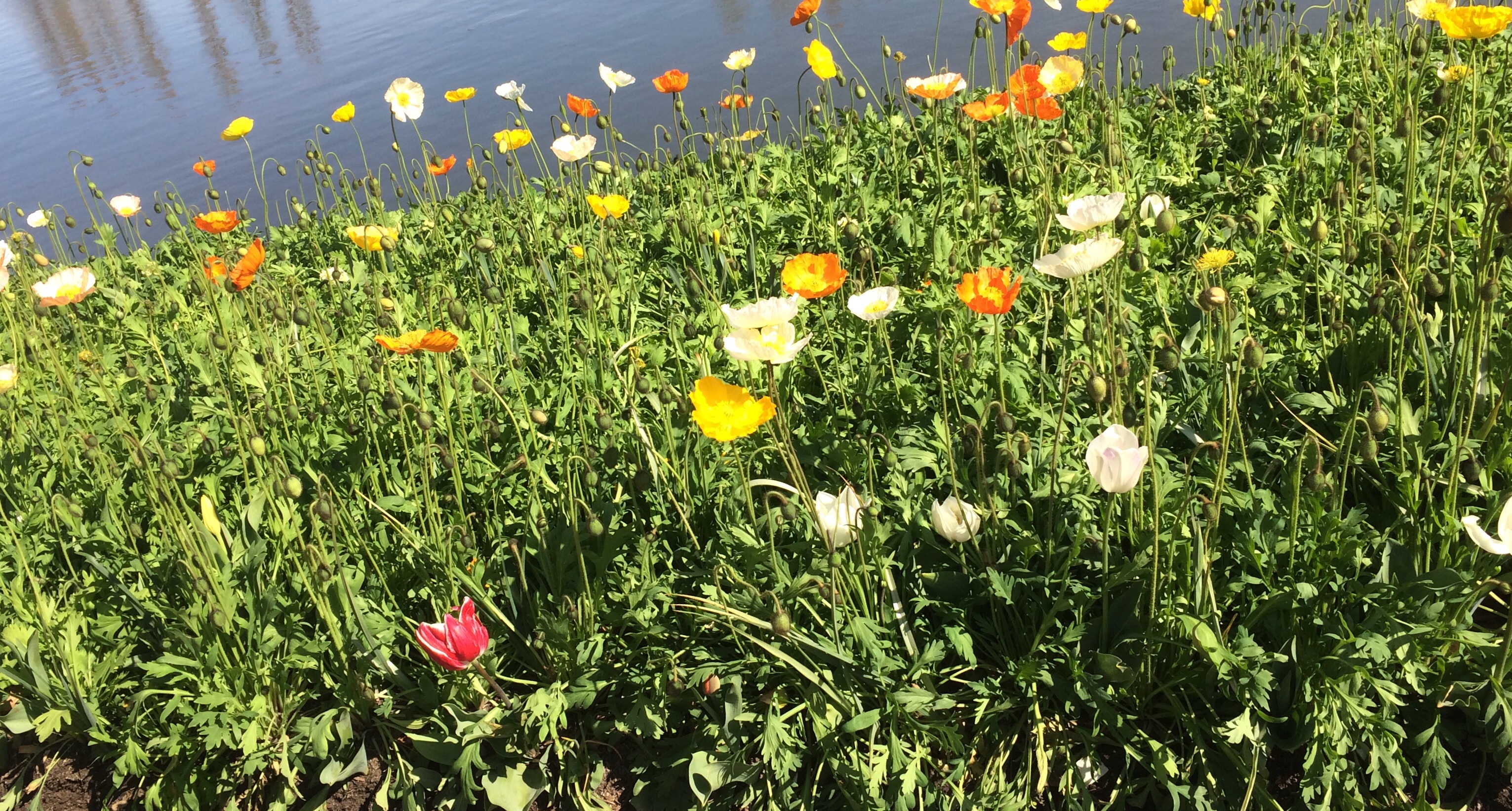 Once again, a good way to compensate for such issues would be to inter-plant bulbs with longer flowering species. The latter can provide consistent colour over a long period of time with the bulbs providing bursts of colour that make the display ‘pop’ but on which the display doesn’t rely. That way, if the bulbs flower at an unusual time, there aren’t any gaps.

The signature aspect of Floriade is the fact that spring-flowering bulbs are arranged in carefully planned layouts. The designers cleverly layout their chosen bulbs in striking patterns that represent something to do with the theme for the year. The first picture below shows one of this year’s layouts. Without a detailed plan, it would be very difficult to layout the bulbs on such a large scale and still create the intended image. 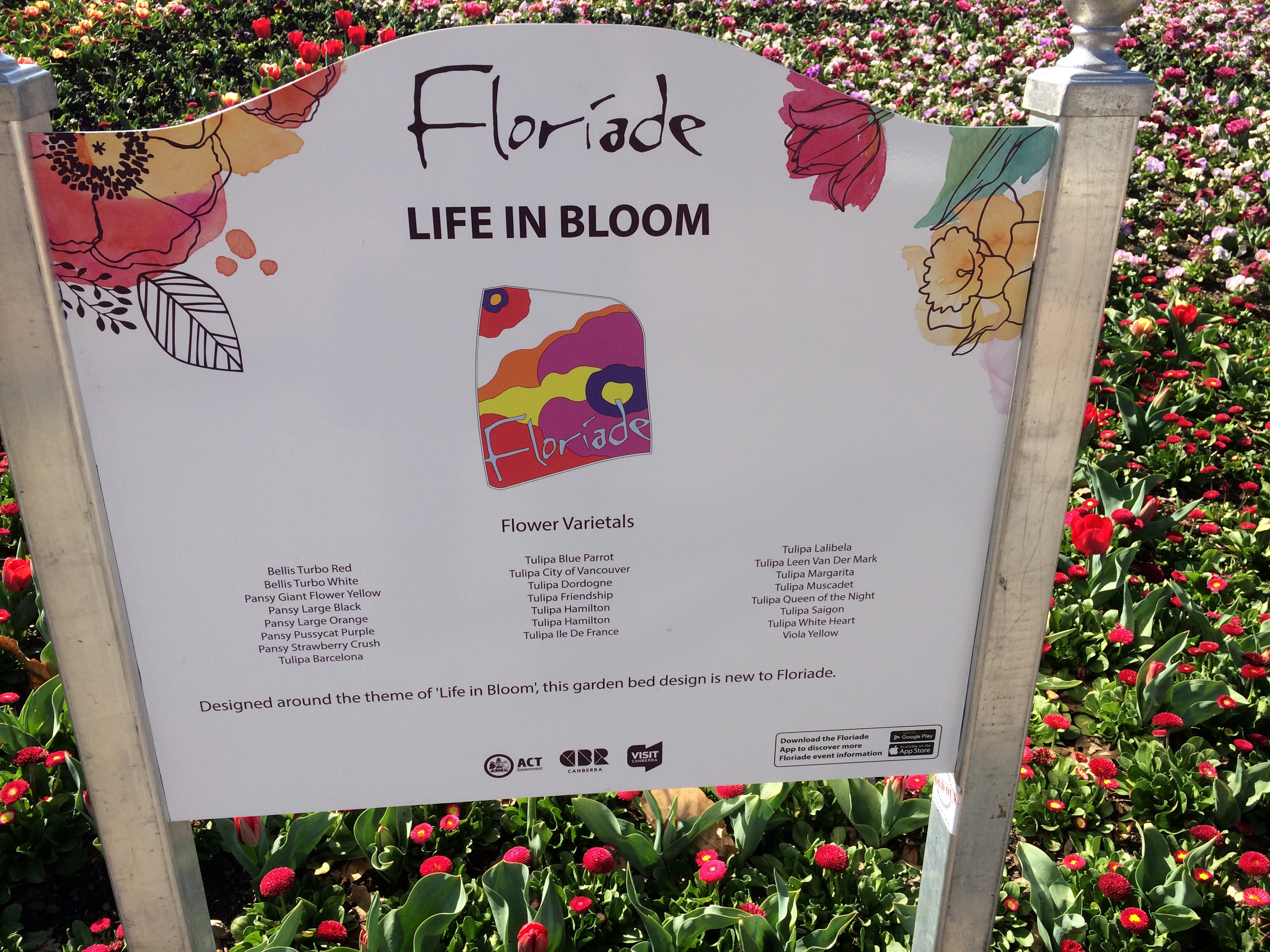 While you might not want to develop such a regimented or formal display in your own garden, it does highlight the value of having a good plan for your bulb displays. Or indeed for any part of your garden. And let’s be frank, whether you like planning your garden or not, if you have at least a basic plan of what you want to plant and where, you can be sure that the next impulse buy you purchase from a nursery will at least fit somewhere in your garden (provided you select a plant that’s on your plan).

There are other ways to incorporate planning into your garden though. As just one example, if you have a small garden or your neighbours have lots of things in their yards that cast shadows on your garden, then you might not have any patches that receive full sun for the whole day (or for long enough at least to grow plants that require full sun). One way to deal with this could be to plant some of your plants in portable containers, such as wheelbarrows, so that you can move them during the day as the sunny spots shift. This doesn’t require a sophisticated plan but it does require you to plan ahead as you need to know, for instance, how many containers you can reasonably employ for this task and how many plants they can hold. You also need to know when your chosen plants will flower and whether you’ll be around to enjoy them. You might think these things don’t require planning but I’ve seen people try something like this without thinking it through and they’ve ended up with containers that were too big and heavy for them to move on their own. I’ve also seen people go to lots of effort to select great containers and plants only to later realise that their chosen species flower for only three weeks over Christmas when they’re always away visiting relatives. 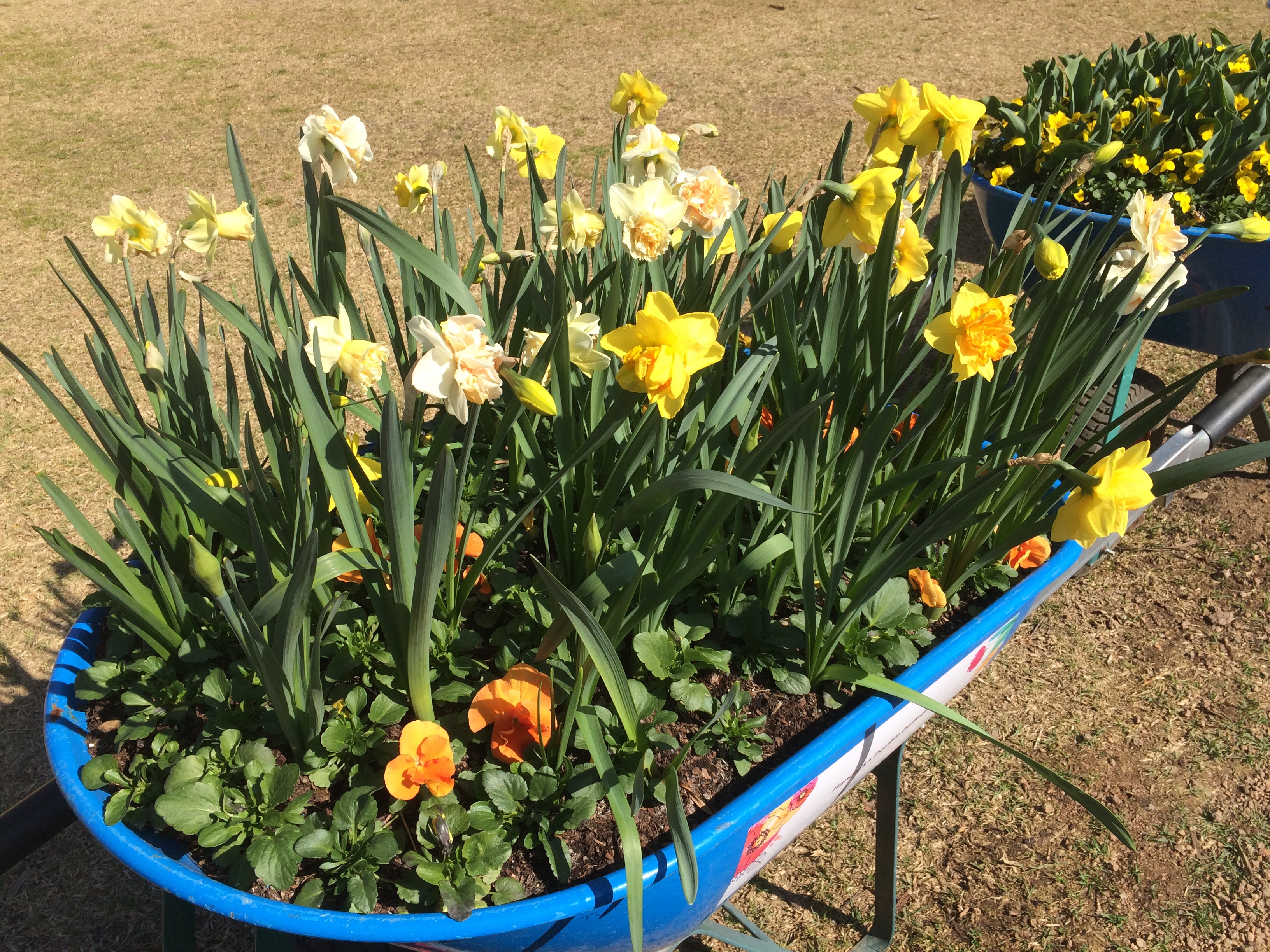 These five tips are just five out of countless things that could have been learned from this year’s Floriade. They might not all be relevant to your garden but I hope that this post has inspired you to look with new eyes the next time you’re visiting a flower show, open garden, botanic garden or even just a friend’s garden. No matter how well put together, such things are always an opportunity to learn something, even if it’s something that you shouldn’t do or something that doesn’t work.

What’s something you’ve learned from a recent garden visit?