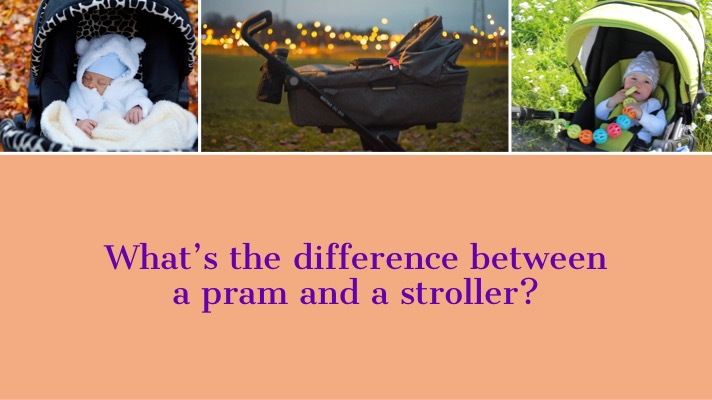 What’s the difference between a pram and a stroller?

The terms pram and stroller are so often misunderstood that choosing between the two can become really difficult. And when you just want to get the right mode of transport for your family, this is a difficulty you just don’t need. So, today I’m sharing everything you need to know in order to decide whether you’re going to get a pram, stroller or both for your family.

What is a pram?

Some prams can carry a baby in a rearward facing position (so you can see them easily) but again, not all prams have this capability. Some prams only allow a newborn attachment to be positioned facing rearward.

Prams are generally sturdy and robust making them a good long-term option. Some prams have inflatable or foam-filled tyres (like those on a bike) that make them suitable for ‘off-roading’. This might be a must if you live in a rural area or on a farm. Some can’t be folded flat, though this seems to be becoming less common.

What is a stroller?

A stroller is a little harder to define. In some areas, particularly in America, the term stroller is used to refer to all pram-like transportation. In this case, a stroller may be like a pram as defined above or it might be like the below description. In areas where pram and stroller are used for different types of baby transport, however, a stroller is usually a more portable version of a pram. It is this type of stroller that I am referring to when I use the term below.

Strollers are still used to transport children but they’re usually used for older children, particularly if the child doesn’t need to sleep in the stroller. The seat of a stroller is generally not able to be fully reclined making this alternative to a pram unsuitable for newborns. In fact, some strollers don’t allow the seat to be reclined at all. Having said that, even in countries where both prams and strollers are sold, some manufacturers will use the term stroller for a model that is suitable for a newborn. If you’re looking for something that is suitable for your newborn, your best bet is to start with prams and look into strollers with care.

Strollers are generally lightweight and easily collapsible, making them a good choice if you use public transport a lot. Having said that, some strollers are still rather robust but are designed to be very portable.

The back-rest in some strollers will only come up to the shoulders of the average toddler meaning they cannot take a nap in the stroller. This is generally only true of the cheapest strollers but is something to check carefully if you’re likely to have your child napping in the pram regularly when they’re a toddler.

What about transport for multiple children?

If you’re looking for transport for twins, your best bet is likely to be a pram. A side-by-side pram has, as the name suggests, two seats positioned side-by-side. An in-line pram, also called a tandem pram, has two seats positioned one in front of the other. Prams for triplets are either in-line or a combination of the two. For instance, some prams for triplets have two side-by-side seats and then another seat in front or on top of those seats. Strollers for triplets are also available but I haven’t come across a model that is suitable from birth.

If you’re looking for an option for a single baby that can be expanded for multiple children later on, some manufacturers produce single prams that have separate seats and other attachments (like bassinets and attachments for car capsules) that you can purchase separately. Some of these add-ons are only suitable for toddlers so if you’re looking for something for multiple newborns these aren’t suitable. You may need to contact the manufacturer to make absolutely sure what you’re looking at is suitable for your family.

Many of the above options are expensive. If you’re looking for an option for a newborn and one or more older children you have a little more flexibility. Some prams and strollers are specifically designed for a newborn and older child and these tend to be cheaper than models designed for multiple newborns. Be aware though that the ‘toddler seats’ in these sorts of prams and strollers are often quite short so don’t provide head support and thus aren’t suitable for naps. If you have an older child that mostly walks everywhere but you want to be able to give their little legs a rest on long outings, some pram and stroller manufacturers sell attachments that may suit. There are skateboard attachments that clip onto the back of the pram/stroller – some of these also convert to scooters for independent travel. For a more restful break, there are also clip on seats. Some of the available options are generic and can be used on a variety of pram and stroller models. Others are only compatible with specific brands.

Should you get a pram or stroller?

Whether you should get a pram or stroller, or indeed both, will depend on your circumstances.

If you live in a rural area, on a farm, or in an area where you regularly walk on dirt tracks or bumpy paths, I would recommend looking for a pram with either inflatable or foam-filled rubber tyres. If you do a lot of trips on public transport, you might want to get a cheaper stroller as well, just for travel.

If you’re looking for an option that will last until your child or children no longer need transport, I would recommend you get a pram or one of the more robust strollers.

If you do a lot of short trips in cities or around urban areas with well-kept paths, a stroller might be the most suitable option for your family, especially if you travel on public transport a lot.

If you spend long days on the go, either a pram or stroller might work for your family but make sure you get a model that allows your child/children to nap.

If you want to know more about what to look for in a pram or stroller, check out my upcoming post that goes into detail about everything you need to know. 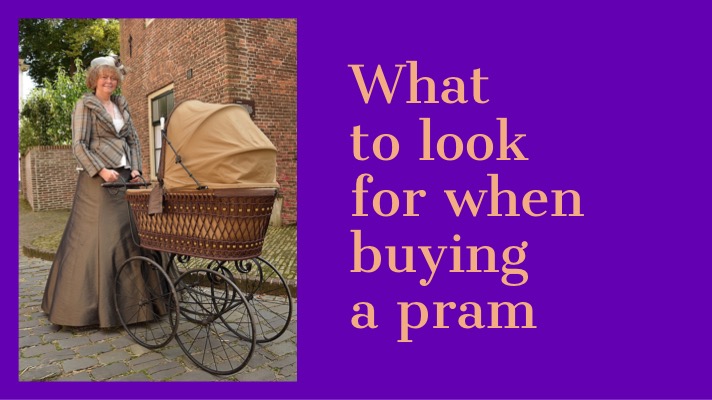 What to look for when buying a pram

Find out everything you need to consider when choosing a pram, whether you’re having a singleton or multiple babies.